I felt like Shenmue merchandise had peaked earlier this year with the official Shenmue rubber duck and cologne, but they’ve been topped by what is possibly the most beautiful piece of memorabilia I own.

From French record label Wayô Records and part of a series of music boxes, the €275 price tag did give me pause, but this thing is seriously beautiful. I’ve got a couple of albums from Wayô and always found the presentation of their releases to be top-notch, and the music box is on another level still.

Here’s how they unveiled it to the world:

Well, it looks and sounds just as good in the flesh. It’s absolutely stunning. See for yourself…

It also comes with sheet music signed by composer Ryuji Iuchi, which will shortly be on my wall alongside my Shenmue III poster with Yu Suzuki’s mark.

Here’s the full unboxing, in lovely 4K HDR for those with a capable display.

As what has been a rather shitty status quo continues to get worse, I didn’t feel like the big new releases in Doom Eternal or the Resident Evil 3 remake were the appropriate antidotes. Instead, I’ve been relying on a little glimmer of light that’s been occupying my Switch since “social distancing” entered the vernacular: Grandia HD Collection.

The first game’s relentlessly optimistic adventure makes it perfect for these bleak times. It was something of a throwback even at release, with its Saturday morning cartoon storyline and colourful, sprite-based characters bucking the trend of dark and gritty post-FFVII RPGs. There are no brooding antagonists and tortured antiheroes – the main character is a young boy, the son of an adventurer and a pirate because why not, intent on making his name as a first-class adventurer by exploring uncharted continents and discovering ancient civilisations with his friends. There’s a militaristic empire on the party’s heels, of course, but it wouldn’t be a Saturday morning cartoon without its Cobra.

It’s a perfectly upbeat change of pace. Not overly challenging, with no esoteric systems to potentially snooker you later on. And it has what remains my favourite RPG battle system ever designed – a perfect mix of turn-based, active time and the spatial awareness of real-time combat that seems simple and yet, once mastered, rewards flawless victories with this soaring, gloriously of-its-time riff. I’ve spent most of my time with the game with a smile on my face. It’s a proper warm blanket of a game.

The HD collection also contains Grandia II, which is still a great game with Dreamcast era 3D graphics that upscale better than Grandia’s sprites – my one complaint about the first game’s remaster is the smeared filtering job on the sprites, which is bearable on the Switch’s screen but looks worse the bigger your display gets. But the sequel comes with a touch of post-FFVII brooding that I can’t bring myself to like as much. Think of it as a nice freebie, with the first game as the real reason to buy this collection.

I’m holding a copy of Shenmue III. I’ve got another two on the way, but that’s not important right now. It’s still hard to believe. It had been a punchline for so long, and even that bonkers E3 was four long years ago. But 18 years after I put down the controller to watch the end credits of Shenmue II, not knowing that the series would spend quite that long in stasis but perhaps suspecting its future wasn’t quite assured, the long wait is over.

Silly as it sounds, it’s actually quite an emotional moment for me. I never really lost hope, even as I’ve become less involved in the community. At some point I reacquired the domain of the old Shenmue Fan Site when I noticed it become available again. Tempted? Nah. But those were fun times.

These are my Japanese copies of the first two games. Going from my purchase of the first one, which would have been in the early days of 2000, as soon after the 29 December 1999 Japanese launch as the Video Game Centre (naturally) could get them, these three represent a little shy of a 20-year journey.

There are even some people who I might send a cheeky tweet with a link to this post. Those dirty non-believers on Twitter and my editorial teams who told me to let it go, that it would never happen.

I’m planning to post some more detailed impressions when I’ve spent some time with the game, but given how sparse my updates here have become, I couldn’t let this day pass without some acknowledgement that I’m still here — and so is Shenmue. 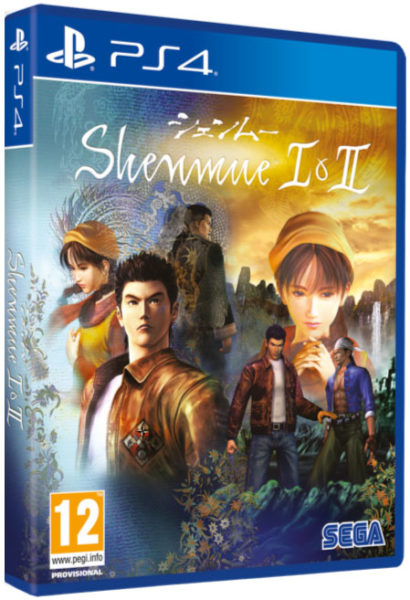 Now that Shenmue III is a reality, and with Sega snapping up related domains, it’s more likely than ever that we’ll see the two Dreamcast games – both among my favourites ever – coming to modern hardware. As I have done with all previous versions, I’ll be buying it on every platform available so as to maximise the series’ commercial viability and do my part, but what does Sega need to do to make this the best possible revival? I have a few ideas…