I couldn’t let a 360 game as big as this go by without giving some impressions now, could I? Just as The Elder Scrolls III: Morrowind hit the Xbox a few months after launch, the sequel does the same thing to the 360 in an infinitely bigger way. Bigger in every way, in fact. So big that I’m just giving some first impressions since I can’t hope to capture it with only a few hours of play. 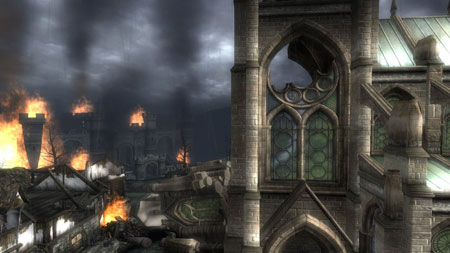 The first thing I need to say is that I didn’t like Morrowind at all. I tried it, but after a couple of hours I could tell that it wasn’t the sort of thing I was up for pouring hour upon hour into. I honestly can’t remember why since it was so long ago, but whatever it was Oblivion hasn’t suffered from the same thing so far. It’s much the same in that it opens slightly slowly – this time with a slog through a dungeon – but once you get into the spectacular overworld the sense of awe is up there with when I first played Shenmue.

It’s kind of strange in that it’s a very deep and customisable RPG that plays somewhat like an FPS crossed with an MMORPG, but it works in making the combat feel involved and allowing the player to feel a part of the adventure. I’m sure everyone reading this is familiar with that feeling in any RPG of finding a new and bustling town to explore, and I spent most of the time in Oblivion experiencing that. I don’t want to spoil the early story, but suffice it to say that there’s a fairly early moment which goes up there with that infamous scene of Sephiroth in Nibelheim for me, and overall I’m certainly enjoying it as much as can be hoped with a swords and sorcery RPG. As much as I like Lord of the Rings I’m not often too big on playing it.

I’m going to be writing something slightly more in-depth for a first impressions feature over on Pro-G early next week, so keep an eye out for that.