I’ll have some spoilers in this post, so you might want to avoid it if you haven’t finished the campaign. I’ll black out any that directly talk about what happens at the end, but I won’t mark obvious or minor ones. Consider yourself warned.

Anyway…the biggest game of the year has arrived and I’ve finished it, as have millions of others, no doubt. All the speculation about how they’d close it – in my case whether or not they’d fire the rings and kill everyone – have been answered and now all we have to show for it is one of the most complete multiplayer games ever made. It’s a hard life… 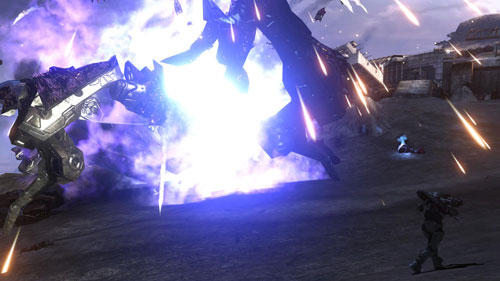 Overall I loved the game, and with the exception of one massive low – mission 8 on heroic was like jabbing myself in the eye for 40 minutes – I thought that the campaign was up there with the first game. In fact I’d probably say it was better since Halo wasn’t without its own infamously bad level and Halo 3 was much less liberal with the repetition of environments, at least dressing them up differently or changing things around. Off the top of my head there are three missions here that I could play until my thumbs drop off and not bore of them – The Storm, The Ark, and The Covenant – up there with The Silent Cartographer and Assault on the Control Room as classics.

Multiplayer is as supreme as it was back in the beta and little has changed since my initial impressions. Big Team Battle on Valhalla with a team of friends is dangerously close to a perfect multiplayer experience, and it’s the new features that allow you to relive it that I want to talk about.

Even if they haven’t yet been matched for depth, Halo 2 was the big step towards making persistent stats a standard feature that has been co-opted for the likes of Battlefield 2 and Resistance. Halo 3 just takes it to the next level, with everything that Halo 2 had and more, including the screenshot facility that we’ll undoubtedly be seeing more of as the popularity grows (see Gran Turismo 4, Forza 2, PGR3, etc). Just going to the stats page for a game lets you view all of the saved media of the best moments such as my double laser kill from across the map (plug). I love taking screenshots to show off the stunning lighting in the game, and the above screen is one such example from my campaign.

The sharing features, coupled with Forge (I’ll link to Bungie’s explanantion since I’ve barely scratched the surface) and the way that it allows you to essentially make custom game modes to be shared and recommended amongst the whole community pushes what LittleBigPlanet will be doing, just with little things like a single player mode and orthodox multiplayer. That’s not a bash of LBP since I want it badly, but the fact that many of these revolutionary features are available right now in Halo 3 – a first-person shooter, in case you’ve forgotten – is why it’s getting all these tens.

I’ll end, aptly, with my thoughts on the ending. It didn’t do what I expected but I found it very satisfying and a great way to finish up the story. Things are still open to some extent (I hope this doesn’t mean Halo 4, though) but it gave closure. I enjoyed how it bookended the whole thing, as the Halo trilogy began with Master Chief getting out of his cryo-pod with little information on his past and ended with him getting into one with a similarly uncertain future. Beautifully done and impressively understated. But in case I haven’t been clear about this, leave the story where it is.

Not one ‘finish the fight’ reference. I’m so proud. 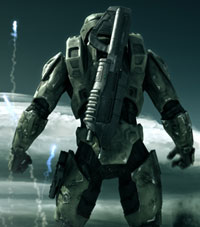