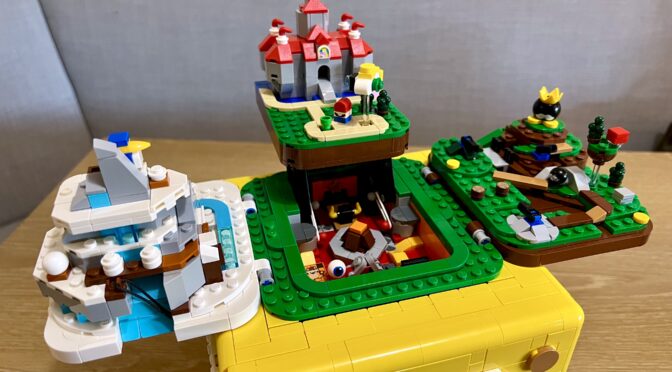 She won’t admit it, but I suspect my girlfriend’s slightly sick of the ornamental positions in our new house slowly being given over to Lego. There have been some phenomenal sets in recent years, as attested by the prominent positions of not family photos, but rather my UCS X-Wing, Saturn V and Old Fishing Shop.

The Mario 64 Question Block, though? For someone who spent their formative years obsessing over the N64, and who basically divides their childhood into Before Mario 64 and After Mario 64, this is just everything I ever wanted.

It’s so full of Easter eggs and intricate details. Here’s a step-by-step walk through the build and some of my favourite touches.

The first couple of steps are focused on the structure and a couple of faces.

The sheer number of glossy yellow tiles to apply is perhaps unavoidably tedious, but it doesn’t take long for the first secret to emerge…

A sliding panel reveals this cute little Bowser, seemingly comprising even fewer polygons than his in-game counterpart but nonetheless capturing Mario’s nemesis. The purple button in front of him hides another surprise, but more on that later.

Lethal Lava Land is the first stage to make an appearance.

Love the little custom printed piece for the sliding Bowser puzzle, and how few pieces the designers needed to represent the Big Bully and floating eyeball.

Next comes the game’s overworld, Peach’s Castle, which sits above the basement stage, appropriately enough.

Up close you can see Mario, Peach and even Lakitu the cameraman — a relic of when 3D gaming was so new that we needed an in-universe explanation for the floating camera — and the front of the castle pops off to reveal the paintings leading to the featured stages. And who’s this hidden on the roof for those who find all 120 stars?

Polishing off the castle also involves some finishing touches for Lethal Lava Land, including a power star hidden behind the Big Bully and the spinning volcano (which actually rotates!), as well as an opportunity to show you the rubber bands that spring load the whole structure.

Next comes the game’s opening stage, which even outdoes what we’ve seen so far in terms of attention to detail.

Everything’s there, from the cannons to the floating island with its tree and red block, the rolling cannonballs to those little stakes that you can run around for coins. King Bob-omb and the Chain Chomp round it out with little custom-printed spheres.

The layout of Bob-omb Battlefield is seared into my memory and I loved finding details as throwaway as the little warp cave halfway up the mountain, barely even visible around the back.

That leaves only Cool Cool Mountain to slide (sorry) into the final berth around the castle.

The detailing is as impressive as Bob-omb Battlefield, representing the penguins, the snowmen, and even the rope lift, rendered in actual string. And, in a cute touch, you can pop the side off to reveal the stage’s iconic slide to relive your favourite GamesMaster moment. The scale of the baby penguin might be a bit off, though — wouldn’t dare chuck that beast off the stage. He’s bigger than the cottage!

The four stages can then be mounted atop the unfinished block and folded back into their hiding place. Finish the two remaining sides and the build is complete — all 2,064 (ha!) bricks of it. My Saturn V is only 1,969 (ha again!) pieces and that’s over a metre tall, showing how densely packed this set is.

It’s Bowser in the Sky, complete with a little spinning turntable to accompany those debates about what exactly Mario says as he tosses Bowser.

Colour me thoroughly impressed with this set. It’s got superb attention to detail and piles of Easter eggs, showing what fans the team who designed this thing were, and makes a superb little ornament when finished. Straight into pride of place on my shelf as one of my favourite Lego sets ever made.