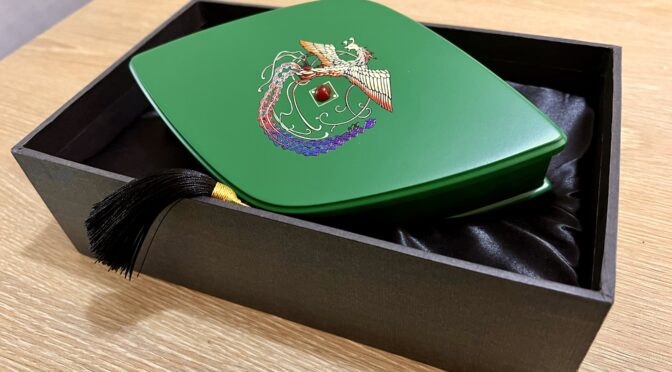 I felt like Shenmue merchandise had peaked earlier this year with the official Shenmue rubber duck and cologne, but they’ve been topped by what is possibly the most beautiful piece of memorabilia I own.

From French record label Wayô Records and part of a series of music boxes, the €275 price tag did give me pause, but this thing is seriously beautiful. I’ve got a couple of albums from Wayô and always found the presentation of their releases to be top-notch, and the music box is on another level still.

Here’s how they unveiled it to the world:

Well, it looks and sounds just as good in the flesh. It’s absolutely stunning. See for yourself…

It also comes with sheet music signed by composer Ryuji Iuchi, which will shortly be on my wall alongside my Shenmue III poster with Yu Suzuki’s mark.

Here’s the full unboxing, in lovely 4K HDR for those with a capable display.

That gives us Rock Band 2 and almost the whole track list for Rock Band – 139 tracks in all – for a total expenditure of £23.39. Admittedly I’m getting by with my Guitar Hero II guitar instead of the Rock Band model, and I had to spend a tad more than I saved to build up that much credit, but it’s still nothing to be sniffed at.

I have no idea what’s been happening with this Rock Band 2 launch, though. It didn’t even seem to have a firm release date at all until a couple of weeks ago, and then after I eventually pre-ordered it I got an email saying that my order wouldn’t be fulfilled for launch day, and neither of the branches of Game in town even had copies, despite their large presence for the first game and its various bundles and versions. This is a major EA release coming out in the run-up to Christmas that’s been promoted on TV and I can’t even see a poster for it?

Probably just a delay in shipping to retail. Blame Somali pirates or something… So today it was confirmed that we, in Europe, will be getting a game several months after its US release. Still, can’t blame the publishers when the console manufacturers and enforcing these draconian region locks. What’s more, the price will be a direct dollar-to-pound conversion, but with the exchange rate at around $1.40-£1, that’s fair enough if you take into account taxes and shipping costs. Oh, and I wonder what it’ll be like in a couple of years when Tony Blair is Prime Minister?

Oops, sorry. I was using a post template from 1995 and forgot to delete it all. I was really ahead of the curve on this blogging thing.

It’s not really on, is it? The timed exclusivity is nearly here nor there for me, because if I was going to buy the game – I’m not, regardless of price – I have the facility to play it on either console and I’d be comfortable importing the region-free US PS3 version if I had to. In any case, even if you got slapped by the full complement of import duties (17.5% VAT and 3.5% import tax), you’d still only be paying £104.47 plus shipping for the import.

So, to return to my original question, who’s more evil: EA or the taxman? It may seem like a rock and a hard place, but EA won’t pay for schools and hospitals, will it? And you’ll end up paying less anyway, so it’s win-win.

In case you didn’t know, Rez HD is out on Xbox Live Arcade now for 800 points. It’s basically the same game as the Dreamcast and PS2 versions, but with HD graphics, 5.1 sound and all the expected online leaderboards gubbins. Buy it if you haven’t already.

Yesterday’s download was the first time I’ve played the game in a couple of years – pretty much since I bought a bargain copy in Japan in 2005 – and it’s even more of a trippy assault on the senses than it was then. If you have an HDTV and a 5.1 system I consider it to be a must-buy, in a similar way to how Geometry Wars became an unlikely early poster child for HD gaming. I’m so glad that stuff like this is getting a new lease of life in downloadable form, without the limited print runs that marred its retail performance on release.

Ignoring the inexplicable oversight to make the game default to stereo sound (go into the settings and set it to 5.1 if you haven’t), essentially turning off one of the game’s main selling points, I spent a couple of hours playing the first couple of stages. It’s the ultimate chillout game – even against similar ideas like flOw or Electroplankton – that you can just sit back with and only worry about a stick and a couple of buttons while it plays some great music for you. I love it, and consequently was listening to the Rez soundtrack at work for most of the day today.

Given that Rez HD also supports using controllers as up to three trance vibrators, much to the presumable delight of Jane Pinckard, unless you’re desperate to have the game on your shelf as part of the collection there’s no reason to bother with the disc-based editions. This one costs £6.80 – that’s SIX POUNDS EIGHTY PENCE, or roughly 1/7th of the recent going price for a Dreamcast copy on eBay – and even has the original 4:3 standard definition version in there for the luddites. Just try to make an excuse not to buy it.